Best Cheap Cell Phone Plans For You By Network Carrier

Here on this page, you will find the best cheap cell phone plans in the world from all mobile phone carriers. Here you can compare cheap cell phone plans and choose the best option for you and your cell phone needs. The competition among the wireless mobile carriers has never been fiercer. The prices are lowering by the minute and the traditional Big 4 network carriers never seize to invent newer ways to attract more clients.

The world-wide known AT&T, t-mobile, Verizon and Sprint are still on the top of the telecommunication world, but following closely by are some smaller operators known to us as Virgin Mobile, Boost Mobile, Metro PCS, Cricket, etc. the latter are known as Tier 2 operator and they are slowly but securely building their market circle by attracting clients with their means. The Big 4 carriers managed to hold their clients mostly by offering a 2-year contract.

However, these were slightly overpriced and the clients began to turn towards the Tier 2 carriers. The members of the Tier 2 group saw the opportunity and lowered their prices, offered unlimited calls and text messages, and to make their services even more appealing they stopped asking their clients to sign a 24-months contract.

They offered highly beneficial and cheap programs and removed the obligatory contract. But now the question arises: Which network carriers are better? Whose service is worthwhile? Which option is more economic? Which option has a greater quality?

With the rise of the smaller- Tier 2 group- network providers, the Big 4 were forced to come up with better offers on the mobile network market. They had to create better deals to restore some of the lost clients. If you want to buy a new mobile phone and don’t want to bother with reading and research I have gathered here specific information about the deals that the various network providers have in store for you:

As I previously mentioned T-Mobile is in the group of the Big 4. As a huge company, it can offer you a lot. With the newest program, you can get unlimited calls for under 50 $ a month. You don’t sign any contracts so you are free to switch to a different option whenever you feel like it. Other traditional plans, in specific areas, include only 1000 minutes and free calls during the weekend. This is a rather famous deal and you can get it for just under 40$. If you feel that you should spend less on mobile services, then T-Mobile has a deal for only 30 $ that includes free data and text messages and 100 minutes of free calls.

See also how to unlock T-mobile cell phone for free if you get the locked mobile device from this carrier.

This network provider is also in the group of the Big 4. Lately, however, it is on the competition track with the smaller network providers. The top deal that AT&T offers for you is the A-List- deal. It grants you free calls, fo an unlimited amount of time, for 5 favorite numbers. Those can be the people you contact most and it is completely unimportant which network providers’ services they use. To obtain this deal you will be charged for at least 59$ a month.

See also how to unlock the AT&T cell phone for free if you get the locked mobile device from this carrier.

See also how to unlock Sprint cell phone for free if you get the locked mobile device from this carrier.

Except for the version of Straight talk, Verizon doesn’t have any particular new deals lately.

From the Tier 2 providers the deals are as following:

See also how to unlock Verizon cell phone for free if you get the locked mobile device from this carrier.

This company offers unlimited calls only from 30 $ a month. The text messages and the data are chargeable.

Cheap Cell Phone Plans From Page Plus Cellular: they have a basic calling plan that offers 500 MB free data for only 30 $ a month. Another popular deal of theirs is the “TALK N TEXT 1200. With the latter plan, you have 1200 free minutes to talk to your friends plus 3000 SMS messages and mobile data of 500 MB.

They offer a basic plan that has free, unlimited calls from 40$ a month. If you use the data or if you are texting additional costs will apply. Sometimes there is a variation of this plan that doesn’t include the internet data and you can get it for only 25 $ per month.

The plans that Virgin Mobile has prepared for its clients vary from 35 to 45 $/ month. With the first plan, you get 300 minutes of phone calls, and with the second you get 4 times as much- 1200 minutes and the newest plan of theirs is the unlimited free calls for only 55 $ monthly fee.

For only 55 $ a month and no contract, you get an unlimited number of texts, limitless phone calls, and web service. And you even get a bonus if you pay your bill on time for 6 months. The price lowers for 5 $ every 6months if you are a regular payer.

You can choose from their two no contract deals. With the first deal, you get 1000 minutes and 1000 SMS messages, plus 30 MB of data. It will cost you 30 $. The other deal is only 45 $ and in it, you have unlimited calling, texting and web service.

For the calling service of this provider, a Wi-Fi connection is used and when there is none then the Sprint Wi-Fii is used to enable your phone call. You only pay 19 $ for unlimited texts and calls and the web service too. They also offer an ultra-cheap deal that is only 5 $ a month for Wi-Fii talk, text, and data.

For 45$ a month, as a sub-brand of the great T-Mobile, this provider gives you unlimited services including texts, calls, and web. 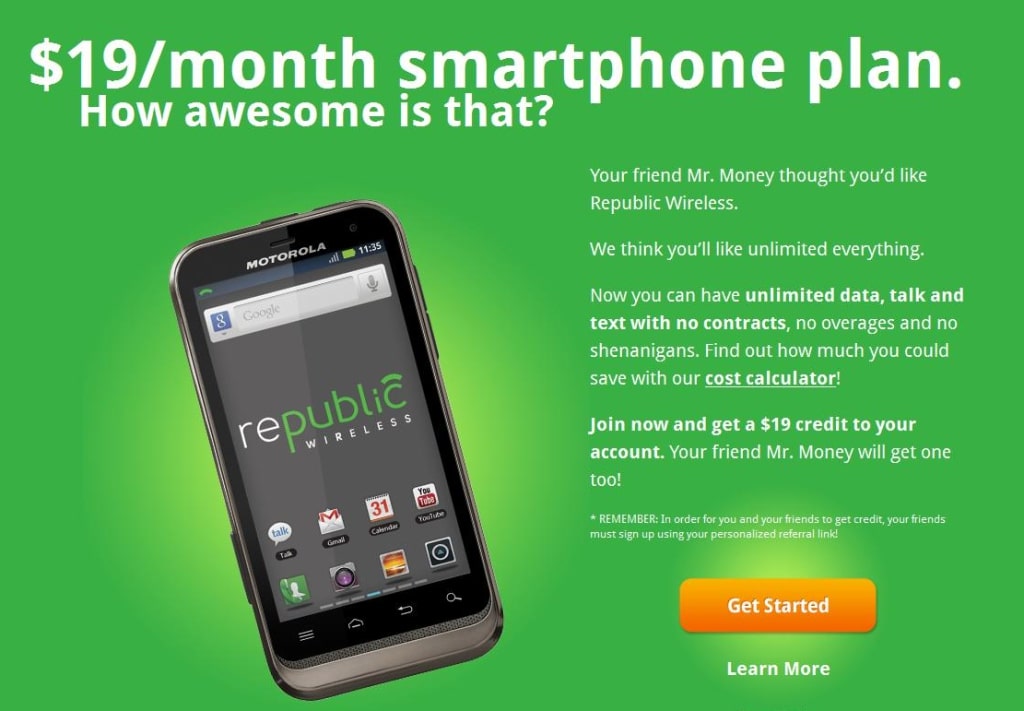 When you buy an Android phone from them, which is at least 99 $, you get 200 minutes of phone calls, 500 texts plus 500 MB of free internet every month of the year.

The deals per month starting from 30$ and they include unlimited talking and texting. You get 500mb of data for that price as well as international calls and texts for an additional 5$.

At all times on the Sprint network as well as free calls and data in the range of Wi-Fi. If there is no internet and you need t make a phone call you pay 1.99$ that day or only 15 $ for a month of unlimited no-wireless calls. To use data you pay 25 per 1 GB.