Released the latest Microsoft Office update in the App Store! It is confirmed that One Note, PowerPoint, Word, Excel will be updated. On top of that, these apps will now support 3D touch shortcuts on the iPhone 6S and iPhone 6S+. Also, the new “Annotate with Ink” feature will bring a set of new exciting tools on the new Draw tab for drawing, highlighting and writing things using Apple pencil on the iPad pro or pen or touch on standard devices.

When you press from the Home Screen of your iPhone 6S/6S+ on an app’s icon you will only get one shortcut. Depending on which app you run it will be either: New Workbook, New Document or New Presentation. Sadly, the Peek and Pop feature will most likely not be available.

Cloud fonts and integration of Spotlight

On the other side now the Office apps will expose their content to Spotlight when used on iOS 9 devices. This means that now you will be able to quickly find your recently opened document thru Spotlight.

Moreover, you can now download on-demand directly from the cloud the fonts for your workbooks, presentations, and documents.

Adjustments and improvements on OneNote

Now the Slipover and Side by Side views have added support for searching, viewing and sharing the title of your open notebook.

“Convert to Shapes” feature can help you transform your hand-drawn shapes into real looking shapes which later can help you create your diagrams and process flows. 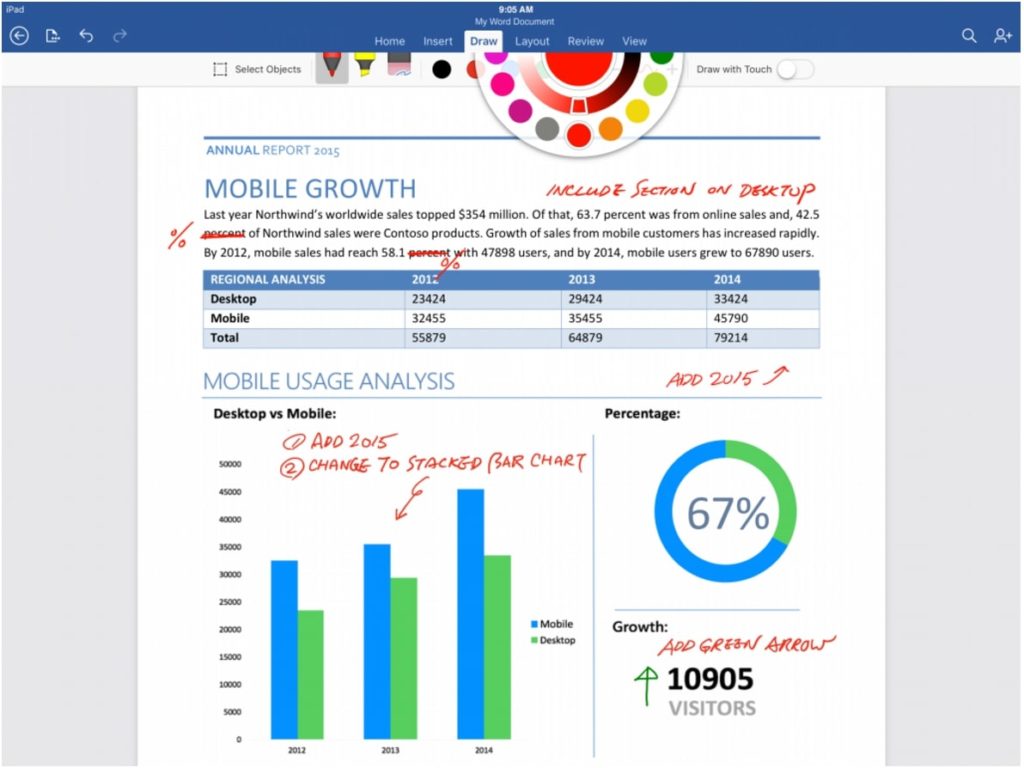 The latest addition in the Office apps now is the Draw tab. It also has extra inking tools that are available on the iPad Pro. According to Microsoft, they have improved their apps. Just for the users to be capable of starting to ink instantly with a pen. Without having to previously select a feature or control. Another improvement is the fact that PowerPoint Designer for Windows Desktop and Windows Mobile and the Morph feature is that they will now be available to PowerPoint for Apple’s iPhone, iPad, and iPad Pro.

And the final but of course not least important feature is that the preview program “Insider”. It allows Office 365 subscribers to use the latest Office Insider features. They are officially released will now be available as an opt-in feature to Mac users from the Microsoft Auto Update tool.